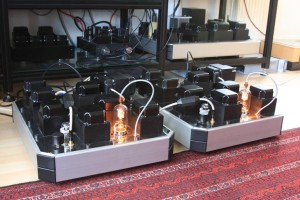 Introduction. After building the 833-amps I had a lot of visitors who were mighty impressed with both sound quality and with the size of the big amplifier. During some audio-gatherings in the Netherlands (all DIY-addicts !) I got requests to bring the big amps with me….but that is simply physically not done.
It was of course a challenge to make something with the same sound-impact….but smaller. And I could check if my calculations were correct.

Eimac. So I was looking for a smaller transmitter tube as an output device. And when you are talking about transmitter tubes the American brand of Eimac will cross your path. Eimac has become the household name for extremely sturdy transmitter tubes; they are still producing today (but different types of course). They started with smaller tubes but were one of the first suppliers of larger tubes which were used in the earliest radars. Eimac did support a lot of radio amateurs who were ex-servicemen after WOII. By supplying tubes in contests for the furthest DX-call Eimac became THE name in transmitter tubes: both for professional use as for private use.
It started with the very small 15R/E, the 25T (also known as the 3C24 by other suppliers), the 35TG, the 100TL/TH, 152TH, 250TL/TH, 304TL/TH, 450TL/TH, 750TL/TH, 1000TL/TH and the 2000TL/TH. Besides these a lot of “funnies” were produced !
TL stands for “low amplification factor” and TH for “high amplification factor”. The number is an indication of the anode-dissipation. 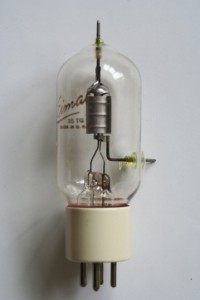 Eimac 35TG. I was looking for something not too big; otherwise I would re-invent my earlier 833-amplifier again. The 25T/3C24 was too small; they gave not enough power. The 100TH was great; but a bit too big. So it became the 35TG. There were some versions of the 35:
The 35T with only a top-connection for the anode;
The 35TG with a top-connection for the anode and a side-connection for the grid.
I opted for the last one; they seemed to be more available. And availability was an issue as these triodes are no longer produced. So before I embarked on this amplifier I made sure that I had a lifetime supply of these tubes !
Striking with these tubes is the use of “uranium-glass”. It is translucent green in color and is used at the top- and side connections to decrease the stress on the glass envelope. The uranium-glass is a bit flexible and will insure a tight fit on the connections. 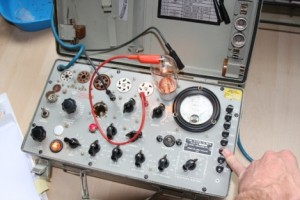 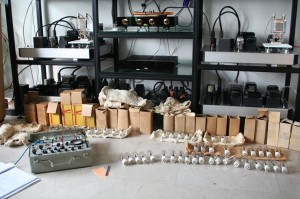 Compactron. This amplifier had to be an understatement in glass…..but (over)compensated by transformers. So as little as tubes as possible….only 2 per monoblock (and one of them is a 35TG). That leaves only a single glass-envelope for input and driver-tasks. As these tasks require different tubes I was looking for a combined tube like the ECL82/84/86 which could fulfill the requirements. But the ECL’s are already used quite a lot: reason enough not to use them here. Enter the Compactron-tubes….these tubes were one of the lasts tube-highlights before the transistor took over. All the knowledge of decades of tube manufacturing was still available when these came to the market (1960 ~ 1970); these were mass-produced in great quantities for television-purposes. But the transistor won; and Compactrons were ditched by everybody. Prices are low; nobody uses them anymore and they are simply thrown away !
Please look at some datasheets for instance the 6FY7, the 6FJ7 and the 6FM7. All double triodes while the triodes are dissimilar. Perfect for my purpose as one of the triodes will be used as an input-device; the other triode as a driver. And there are lots more of Compactrons simply waiting to be used. 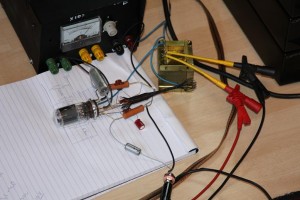 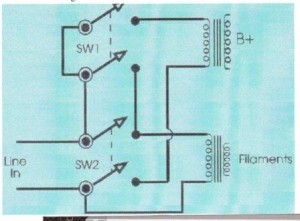 Schematic. It is really very straightforward. The more complicated a design…the more problems you will encounter.
RCA input → input transformer → gridstopper (the only resistor in the audiopath) → 6FJ7 (both sections used; each dissimilar triode for its specific function) → interstage → 35TG → output transformer. Of course used in ultra-parafeed explained earlier.

I took the liberty to skip more schematics of the powersupply as it is business as usual:
Separate transformers for filament and B+;
Each power line its own hexfred-rectifier ; snubber ; coreless coil; first capacitor; choke and second capacitor. It is a lot of iron. Please see my earlier text in the 833-amplifier.
The picture shows one of the filament choke + connected coreless coil. 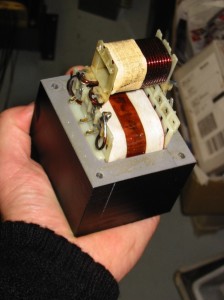 When you have such a minimalistic schematic each component really counts. Component quality does count. You don’t have a lot of components, but each used capacitor and resistor will shine through. Especially resistors are frowned upon; totally incorrect. Please use non-inductive versions: normal metalfilm resistors will react due to the present and nearby transformer-fields. In essence each metalfilm resistor can act as a local feedback; exactly what you DON’T want.

Design. A lot of (interstage) transformers, coils and chokes. Again this will be not a featherweight-amplifier (they weigh 55 kg each). The same construction-profile as chassis. The rectifiers are bolted to a slab of copper for optimal heat transfer.
B+ is more than 800 VDC. The output is around 10 watts. Please no efficiency remarks….
Very useful is the “Fool’s Switch”: with 2 separate rocker switches the transformers (separate for filament and B+) is switched on. And it doesn’t matter which switch you use first: always the filament is first and the B+ second. Switching off is exactly the reverse: always the B+ is shut down first. 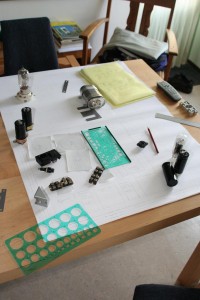 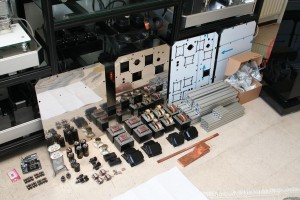 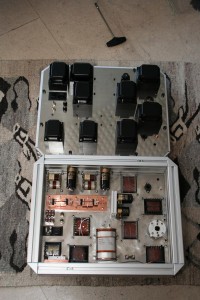 Up and running. As with all thoriated tungsten filaments these tubes shine; pictures are normal in normal daylight and not over-exposed ! From the Eimac-leaflet: “plate is designed to operate at a cherry-red color on its normal dissipation rating of 35 watts. A perceptible red color is noted at 17 watts and a real bright red at 70 watts. These temperatures are perfectly permissible and no damage will result from such operation. The advantages of using the anode color as a tuning indicator will be readily appreciated as you become more familiar with the Eimac 35TG”. 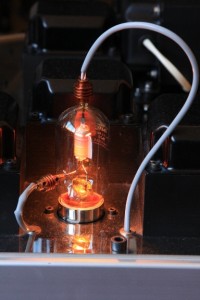 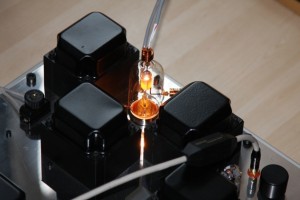 Results. Although 55 kg these amplifiers are transportable and were very successful at some audio-gatherings. Everybody agreed that  the sound quality was excellent; the low wattage was not believed. It sounded far bigger than “only 10 watts”.
It was the last amplifier with transformers from my Dutch supplier. They stopped…..and forced  me to look for a new source. Then Christof crossed my audio-path with his interest in the 833-amp which led to the EL82 (with Silverstepper). Next project will be a DAC. It is already finished and running with acceptable output transformers. Awaiting Christof’s effort to make some special transformers for this purpose…… 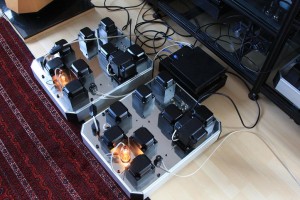